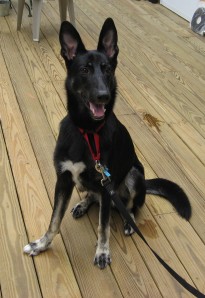 Sophie is my German Shepherd-ish mix who I adopted at four months old from A Forever Home Rescue Foundation, a wonderful local rescue.  She came with a fair amount of skittishness and reactivity.  At almost four years old, she has mastered more cues than any dog I’ve had before.  But she still has her behavior issues.  With another dog, I might be out on the agility circuit right now.  But I wouldn’t trade my Sophster for the world.  Without her, I would have never learned as much about animal behavior and training.  And maybe that is just what I needed!  Life with Sophie has exposed me to many, many wonderful professionals whose work revolves around companion animals.  She has helped me to realize the obvious – that I can bring my passion for animals and the law together. 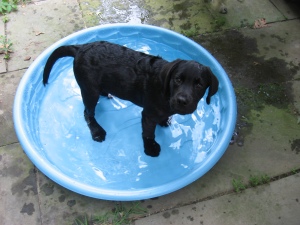 Boomer is Sophie’s new companion.  He’s a wonderful addition — cute, confident and outgoing, and a Canine Good Citizen!  Boomer’s temperament could not be better, and you would expect nothing less of a dog with multiple family members who have turned out to be fantastic service dogs.  At five months old, he was already giving Sophie the runaround with bouts of tug and wrestling, and he was even winning Sophie’s favorite games of Catch Me If You Can and Keep Away.  I think Sophie’s met her match! 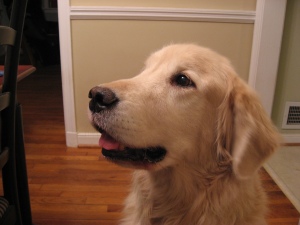 Raoul is unfortunately no longer with us, but this page would not be complete without him.  To date, Raoul is the most handsome dog I’ve ever met, and, typical of a Golden, was as sweet as sweet can be.  I thank him for his enduring patience in helping me raise Sophie, and for the infinite grace and gentleness he showed to Xhufi in her final days.

Although I had Sye for only three short weeks, she taught me so much.  Suffering from extreme fear-based aggression towards men, I sadly had to return Sye to the shelter.  I wanted more than anything to “save” her.  But there is no doubt that she served her purpose, even in the short time I spent with her.  I will be eternally grateful to her for introducing me to the world of animal behavior and getting me ready to face the challenges of training Sophie. 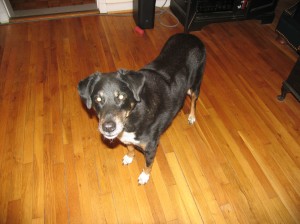 Last but by no means least, Xhufi was my first dog.  She was the mutt of all mutts and the chow hound of all chow hounds.  Xhufi came into my life as I finished my stint in the Peace Corps, and she followed me from Tirana, Albania to the Washington Metro area.  Fortunately she was far too laid back to ever cause me much grief.  I only wished I knew more about training when I had her.  As food motivated as she was, I probably could have trained her to do just about anything!  I miss her more than I can say.

Picture of Sye compliments of the Animal Welfare League of Alexandria.

5 thoughts on “My Inspiration”