China and other Asian countries have been known to use dog and cat fur for garments, taking the lives of up to two million dogs and cats a year.  One horrific practice reported by the Humane Society of the United States involved the skinning alive an animal called the “raccoon dog.”   A giant loophole in legislation allowed many of these garments to pass into the U.S.

Kudos to House Representative Jim Moran (D-VA) and the Congressional Animal Protection Caucus for another federal legislative victory before the year’s end, with the passage of the Truth in Fur Labeling Act of 2010 (TFLA).  The House introduced the bill (HR 2480) back in May of 2009, and passed HR 2480 July 28, 2010.  The bill passed in the Senate by unanimous consent earlier this month, and President Obama signed the bill into law on December 18, 2010.

There has been federal legislation targeting fur labeling on the books since at least 1951, when the Fur Products Labeling Act (currently 15 U.S.C. 69) was passed.  However, the law contained a loophole that did not require labeling of the origin of fur on garments if the value of the fur was $150 or less.

That loophole meant that a coat with fur trim on just the sleeves would need no labeling at all if the cost of the fur was $150 or less.  Not even labeling to tell the consumer whether the fur was real or faux.  Or what kind of animal the fur came from.   Or if the fur came from companion animals.  According to the Animal Legal Defense Fund, that loophole allowed 13% of fur items in the U.S. to go without labeling.

The TFLA has now closed that loophole, requiring labeling on all imported fur garments.  Garments will need to list the species of animal that the fur comes from, the country of origin, and other information.

What is missing in this legislation?  The outright ban of the use of fur from a companion animal.  Or any animal, for that matter.  HSUS estimates that the fur industry takes the life of 50 million animals a year.  If you would like to shop with fur-free retailers and designers, check out this list on HSUS’s site.

I am proud to say that Virginia is ahead of the curve here.  Thanks to Virginia Code Section 3.2-6589, it is unlawful to sell a garment with hide, fur or pelt from a domestic dog or cat.  Violations of Virginia’s law carry a fine of up to $10,000. 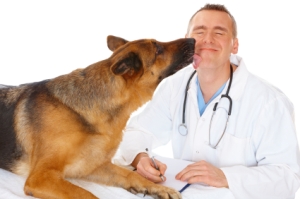 Day in and day out, veterinarians work tirelessly to care for our companion animals.  On some days, they experience the joy of performing an initial wellness exam on a newly rescued dog or cat.  And on other days, they help us through painful and heartbreaking decisions and final moments with our best friends.

Bark Magazine’s recent blog post on The Bark highlights further lengths that veterinarian associations have recently taken to help the animals they serve every day.

Last month, the American Veterinary Medical Association Executive Board voted to revise to the oath taken by veterinarians to highlight animal welfare as a priority.  The Board added the parts in bold to the existing oath:

“Being admitted to the profession of veterinary medicine, I solemnly swear to use my scientific knowledge and skills for the benefit of society through the protection of animal health and welfare, the prevention and relief of animal suffering, the conservation of animal resources, the promotion of public health, and the advancement of medical knowledge.”

For more on the process of how this change came about, check out the article, Veterinarian’s Oath Revised to Emphasis Animal Welfare Commitment on the AVMA’s website.

Earlier this month, the Association of Shelter Veterinarians Board of Directors released its Guidelines for Standards of Care in Animal Shelters, which is the result of the two-year ASV Shelter Standards Project initiative.  The Guidelines address the “Five Freedoms”:

If you would like to know more, visit the ASV website’s information page about the Project, which includes a link to the full version of the 65-page Guidelines.

These developments – particularly with the AVMA oath – are timely considering a recent MSNBC story, “When I Die, So Does My Dog:  Some Pet Owners Take Animals To Their Graves.”  Reading that story made me wonder if a vet would or could refuse to euthanize a healthy companion animal like the two-year old Yorkie mentioned.  As I delve more into pet trusts, I vow to educate a client who wished to have their pets euthanized upon their death about this new oath and the many wonderful options for caregivers.  [Hint, hint – to learn more about estate planning options for your companion animals, keep your eye out for a certain upcoming NovaDog Magazine article!]

If you’ve been watching updates about animal crush videos on my blog, or getting the news elsewhere, you’ve been anxiously awaiting the day for President Obama to sign Amended HR 5566 into law.  That day has finally come!

Amended HR 5566 addresses the void in the law left by US v. Stevens, in which the United States Supreme Court struck down Congress’s previous effort to criminalize animal crush videos.

The only lingering question is whether Amended HR 5566 will also address depictions and videos of other forms of animal abuse – most notably dog fighting, which was precisely the issue in Stevens.

Dog owners here in the Northern Virginia area are fortunate to have a choice of many great dog parks.  Ask any number of people, and they will likely tell you Shirlington Dog Park is the best of the bunch.  Where else can your dog frolic and play in fully enclosed acreage, and even take a dip in waters deep enough to swim? 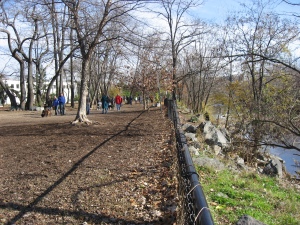 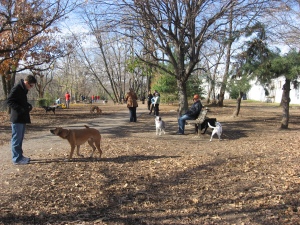 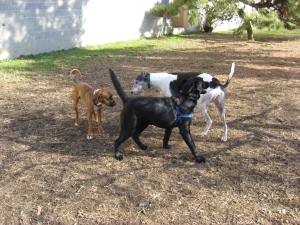 So it is no surprise that Kim Houghton chose a space right off of the Shirlington Dog Park to open up Wag More Dogs, a new doggie daycare, boarding and grooming facility.  As wonderful as Shirlington Dog Park is, there is one huge drawback.  The park is sandwiched between Four Mile Run and a commercial district, and when your back is facing Four Mile Run, the view is – “industrial.”  Or, “warehouse-y.”  Well OK, it’s downright ugly: 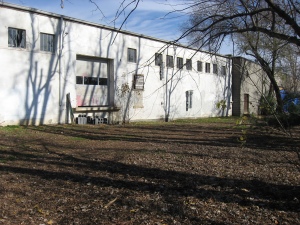 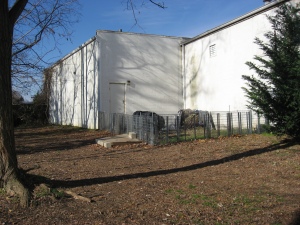 To beautify the view from the park, Ms. Houghton paid $4000 to commission local artist Mark Gutierrez to paint this 16’ x 60’ mural of joyful dogs and dog bones on the back side of the building:

Arlington County reacted by freezing Wag More Dogs’ building permit.  The County’s justification?  The mural was a prohibited “sign” under the Section 34 of the Arlington County Zoning Ordinance because it shows “dogs at play” and directs the viewer’s eyes to the store’s emergency exit.  And if the “sign” didn’t come down, the penalty could be a $200 civil fine.  If ten more days went by, there could be up to a $500 civil fine for each subsequent violation, up to a total of $5000 in fines.  After that point, the matter could be referred to the Commonwealth Attorney’s office for criminal prosecution.

Arlington County Zoning Ordinance Section 34(B) defines a “sign” as any “word, numeral, figure, design, trademark, flag, pennant, twirler, light, display, banner, balloon or other device of any kind which, whether singly or in any combination, is used to direct, identify, or inform the public while viewing the same from outdoors.”  For commercial buildings in an M District (like Wag More Dogs’ building), each tenant is allowed a maximum total sign area of the greater of either 60 square feet, or one square foot per linear foot of the tenant’s frontage.  Displaying a sign requires a sign permit from the Zoning Administrator.   Artwork requires no permit.

One option for Wag More Dogs was to apply for a “Comprehensive Sign Plan.”  According to the County, the Arlington County Board was unlikely to approve a Comprehensive Sign Plan, but Ms. Houghton was welcome to try – after applying for a use permit, paying a non-refundable fee of $1782 and waiting at least two months for an outcome.

Another option the County suggested was to change the pictures in the mural to something other than dogs, bones, paw prints – anything except something having to do with dogs and pets, so that there would be no relationship to the business.

In the meantime, Wag More Dogs had to cover the mural with tarp.  In September 2010, the County issued Wag More Dogs a temporary certificate of occupancy, conditioned on the tarp staying in place.  So now when you are romping with Rover in the dog park, you see this:

After the tarp was in place, the County suggested yet a third option – turning the mural into an “informational sign” that would not require a permit if Ms. Houghton, at her own expense, added “Welcome to Shirlington Park’s Community Canine Area” in letters at least four feet high.

Understandably, none of these options were all that appealing to Wag More Dogs.  Along came the Institute for Justice, whose motto is “Litigating for Liberty.”  The Institute just filed a complaint on behalf of Wag More Dogs in the U.S. District Court for the Eastern District of Virginia.

The complaint argues that the County’s definition of “sign” is unconstitutionally vague and an unlawful restriction on free speech.  Wag More Dogs is demanding declaratory relief that the sign definition is unconstitutional, an injunction against messing with the mural and Wag More Dogs’ certificate of occupancy, nominal damages in the amount of $1 and attorney’s fees and costs.

There is no doubt that murals go a long way to beautifying neighborhoods, particularly in commercial areas.  Many local neighborhoods like Del Ray and Arlandria have great murals that add charm and character up and down Mount Vernon Avenue: 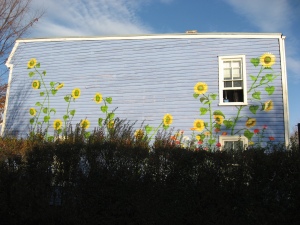 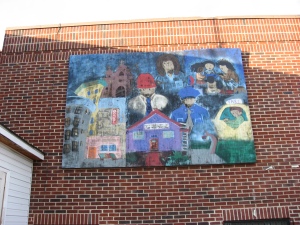 Residents, local businesses and dog park patrons are rooting for Wag More Dogs on this one.  And this stand-off has created quite a stir in the media – from the Washington Post to the Washington Business Journal.  The Institute for Justice’s website also has a great page about the law suit.

I will be watching and reporting on how all of this unfolds.  In the meantime, I will join my neighbors and fellow dog park patrons in cheering on Wag More Dogs and the Institute for Justice!

If it were up to you, what would it be — art or signage?

Error: Twitter did not respond. Please wait a few minutes and refresh this page.