I have just started reading the wonderful book, Dog Sense, by John Bradshaw, in which Bradshaw discusses (among many other topics) how science can help redefine dogs’ roles in our lives. We may not need our dogs to help us hunt and herd livestock in our daily lives these days. But as we learn more about their incredible capabilities, dogs are taking on ever more specialized tasks. Three wonderful examples came to the forefront as I watched the news and my Facebook account this past week.

We’ve all heard of drug-sniffing and bomb-sniffing dogs – but a sperm-sniffing dog? Apparently, a Swiss K-9 named Rapports Opus is specially trained to detect sperm. Rapports Opus recently caught the scent of sperm at a crime scene in a Swiss park where a woman claimed a man had forced her to perform oral sex on him. Officers sent the evidence for testing, and the DNA in the sample matched that of the 23-year-old suspect. The suspect has been apprehended, and is currently facing trial on rape charges. That is one impressive dog!  Thanks very much to Nan Arthur of Whole Dog Training and Christy Hill of Coaching Creative Canines for posting this story.

Speaking of K-9s, a local K-9 unit recently lost a hero. Lightcap, a bomb sniffing K-9 with the Fairfax County Police Department, served from 2006 to 2011. Not even cancer kept this dedicated K-9 down, with Lightcap continuing his service during his final year even while battling the disease. Lightcap not only sniffed bombs, but also performed work such as finding shell casings at the scene of shootings. Lightcap passed on July 14 of this year. May this hero rest in peace. Special thanks to Lesley Sullivan of The Pawkeepers for bringing this story to my attention.

Of course, law enforcement is not the only area where dogs use their specially honed detection skills. Service dogs are becoming more and more prevalent, including service dogs who can detect seizures. Evan Moss, a seven-year-old boy here in Northern Virginia, suffers from epilepsy, which is causing severe and debilitating seizures. Evan recently heard about seizure detection dogs. He and his parents realize that a seizure detection dog would be life-altering for Evan, and contacted 4 Paws for Ability. The only problem is the price tag — $13,000. So what did Evan do? He wrote a book called “My Seizure Dog,” in which he describes all the wonderful things he will be able to do with the aid of his special service dog. Evan’s book is $10, and you can purchase it online at CreateSpace.com or Amazon. You can also make a donation Evan’s fund with 4 Paws for Ability. Evan also has a website, Dog 4 Evan.  If you would like to meet Evan in person, he is having a book signing today from 1:00 to 3:00 at the Grounded Coffee Shop at 6919 Telegraph Road in Fairfax County, Virginia. What a special child! Best of luck to you, Evan! Thanks to the Washington Post for highlighting Evan’s story in this weekend’s Metro section.

UPDATE (7/25/11):  Congratulations, Evan!  The Washington Post reports that 600 people went to his booksigning at Grounded Coffee, 400 books sold (that’s $4000 right there!).  And donations are still pouring in.  The donation link to Evan’s website, www.dog4Evan.com, shows he has over $7,000 raised now!  Looks like Evan will have his seizure alert dog, and hopefully very soon!

UPDATE (7/27/11):  Evan will be getting his service dog!  He reached his goal of $13,000 — and the donations are still rolling in!  Plus, Evan’s book is #1 on Amazon for bestsellers in Children’s health books! Congratulations, Evan!

UPDATE (8/2/11):  Evan has raised over $20,000!  Not only will he get his dog, the extra funds will go to two other deserving children who need service dogs!  Check out today’s Washington Post update for more info on this fantastic story.

Excuse the silence for the last couple of weeks, but I am back and rejuvenated from a wonderful vacation in Costa Rica.  We flew into Liberia — a town in the northwestern province of Guanacaste with a more laid back airport than San Juan.  We stayed in Playa del Coco, a beach on Papagayo Bay on the Pacific side of Costa Rica.  Playa del Coco is aptly named due to the dark brown, cocoa colored sands.  If I had to do it all over again, I would not have stayed in this town, but we did have a lovely view from the balcony of the condo we stayed in. 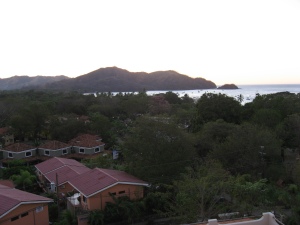 We managed to walk over to a nearby, quaint little beach called Playa Ocotal.  I fear development is moving so quickly that this beach will also be overrun with tourists soon, but for now, it is quiet and pleasant.  I also met my favorite canine pal in this town.  The dogs don’t generally live inside houses, and the ones I saw wandering around fortunately appeared healthy and generally happy.  This guy came right up to me and put his head in my lap for a good ear rub.  Then he laid down under this table for a nap.

Playa Tamarindo is a gorgeous beach.  There were lots of tourists in this town, and lots of people who came to visit and just ended up never leaving.  This beautiful calico joined us for lunch one day.

The highlight of the trip was traveling to the cloud forest in Monteverde.  Here are some shots of the gorgeous countryside on the way from Playa del Coco to Monteverde.

Once we got to Monteverde, we spent the day in Selvatura Park.  We started with a canopy tour of the rain forest.  Had I known more about “canopy tours” and “zip lines,” I’m not sure I would have worked up the nerve to participate, but once I was up there, I was glad I did!  After lunch, we walked through the hummingbird garden.  What beautiful, graceful creatures!  We ended the day with a walk on suspended bridges.  Unfortunately, we really didn’t see a lot of wildlife.  It seems that all the work to put in cable lines and suspended bridges, and all of the foot traffic, manages to scare the animals away.  So much for pure ecotourism. 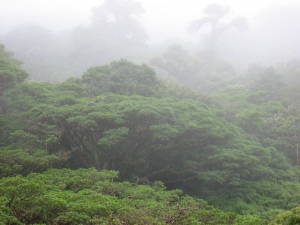 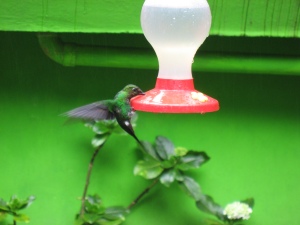 On the way back from Monteverde, we stopped in a town where some folks kept Macaws and other animals — including puppies!  They were kind enough to let us into their yard to take some pictures. 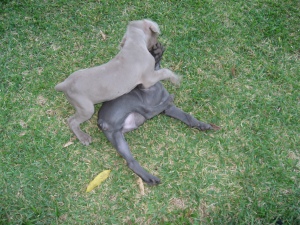 On my last couple of mornings in Playa del Coco, I made sure to spend some time with some local animals, including the cat who frequented our breakfast hangout every day.

It is apparently not all rosy for companion animals in Costa Rica.  But towns and vets are making efforts to spay and neuter the strays.  In fact, Playa del Coco had an adoption and sterilization program.  Although I didn’t want to see animals without homes, I was glad to see strays who seemed to be in decent health, and some even well off enough that they had time and energy to play.  I didn’t have my camera handy one day, but one little canine beach bum in Playa del Coco took it upon himself to “adopt” many of the tourists and play in the sand with anything he could find!

As wonderful as Costa Rica was, and as friendly as the Costa Rican people were, we were glad to get back to Boomer and Sophie.  Much thanks to our dog walker and dog sitter from Fur-Get Me Not!  We could tell how spoiled the dogs were while we were away, because instead of going crazy when we got home, they just took it all in stride!

Don’t miss the brand new edition of NOVADog Magazine!  There is a ton of great information, and you can read the magazine cover to cover right on line!

The cover features the handsome Golden Retriever Hunter, loved by Tammy Rosen of Fur-Get Me Not.  Inside is a wonderful article by Vivian Leven Shoemaker, Fur-Get Me Not’s Training Director and owner of Positive Dog, (starting on page 14) on interactive toys and playing with your dog.

The Expert Advice column by Lisa Colon Tudor of KissAble Canine (found on page 10) talks about humping behavior and how to stop it — a very hot topic for Boomer right now!

And my colleague Jennifer Lee and I contributed an article about how to include pets in your estate plans (starting on page 19).  My favorite part of the article?  The story of a caregiver of three lucky rescues in Maryland who continues the deceased owner’s weekly ritual of making a Friday night spaghetti dinner for the dogs.

There’s much, much more in this edition, so please check it out! 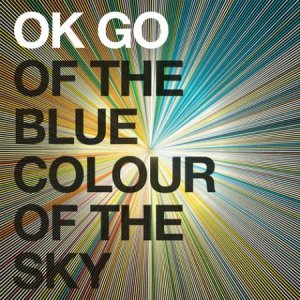 Here’s a great way to have a laugh and support animal rescue at the same time!  If you want to pass this video along, PLEASE go to www.okgo.net/dogs to download this video and make a donation through OK Go’s site.  The band put a ton of hard work into this video, and the animals deserve it!  The funds will be earmarked for rural, volunteer run animal shelters through the ASPCA.

If you would like to know more about how OK Go made the video, take a look at this post, Here They Go Again:  New OK Go Video is a White Knuckle Ride on the Guardian’s site and How OK Go Went to the Dogs in Their New Video on New York Magazine’s site.

Kudos to the Lynchburg Fire Department!  Captain Ron Sanders recently lost his incredible Belgian Malinois search and rescue dog, Ondo.  At 13 years old, Ondo had actually re-certified as a search and rescue dog, and was the only dog during the recertification test to find all six victims!  He was a fantastic dog that needed to be recognized.

In memory of Ondo, the fire department raised donations for pet oxygen masks to install in Lynchburg’s fire trucks and rescue units.  Just like Ondo’s tireless work in saving human lives during disasters such as Hurricane Katrina, these masks will aid in saving the lives of pets.  What a great way to honor a fantastic dog!

Special recognition goes to everyone who donated, along with Dr. Amy Touton of Lake Forest Animal Hospital, who helped to get the proper masks to fit pets, SurgiVet who provided the masks at a discounted price and shipped them for free, and Virginia-based High Peak Sportswear, who provided discounted bags to carry the masks with free printing “In Memory of Ondo” and instructions on oxygen saturation levels based on the size of the pet.  How wonderful to see so many folks chipping in to recognize Ondo’s years of service!

For more information on this story, check out this New Era Progress article, Pet Oxygen Masks Distributed This Week, on www.neweraprogress.com.